Climate change is real. We’re watching it affect our planet on a near-daily basis. US research agencies, along with independent scientists here and abroad, agree that there is real evidence that our planet is undergoing significant, measurable warming. The EPA’s FAQ notes, “Rising global temperatures have also been accompanied by other changes in weather and climate. Many places have experienced changes in rainfall resulting in more intense rain, as well as more frequent and severe heat waves. The planet’s oceans and glaciers have also experienced changes: oceans are warming and becoming more acidic, ice caps are melting, and sea levels are rising. All of these changes are evidence that our world is getting warmer.” 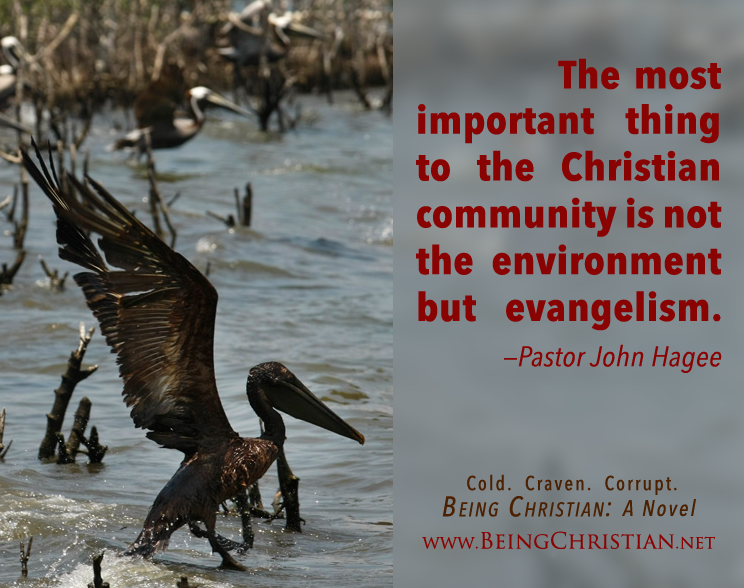 Yet, within the Christian Fundamentalist movement, there is a stark denial – even intentional ignorance – to the notion that human actions have consequences so dire as to endanger our God-given planet; – it isn’t Congress,’ but God, who will determine the earth’s – – and mankind’s – – ultimate fate. In other words, it’s a fool’s errand, and one that would do untold economic damage to our corporations, for politicians to take meaningful steps towards alleviating what God has ordained.. As reported by Raw Story, “Rep. John Shimkus (R-IL) said in 2010 that he opposed action on climate change because “the Earth will end only when God declares it to be over.” He is the chairman of the Subcommittee on Environment and the Economy.”

The Fundamentalist Christian approach to the environment is similar to the Scopes Monkey Trial and the fight against evolution, but this time deniers pose a very real threat to the future of our planet. The Christian Science Monitor reported, “[The supporters and deniers] both willfully ignore mountains of firmly established scientific evidence. Both groups falsely portray the scientific community as divided over settled science. Both groups make spurious appeals to academic freedom, arguing that “both sides” of the debate should be presented as though they possess equal merit. And both groups derive most of their funding from privately funded think tanks, having scant presence in the science departments of accredited colleges and universities … But climate change, unlike evolution, is happening on a time scale that humans can directly observe.”

Republican politicians, as well as voters and pastors with deep pockets and influential voices, are railing against the validity of global climate change. Their reasoning is threefold:

First, why should we worry about climate change when we know that God created a perfect Earth (10,000 years ago, give or take)? God loves His children, after all, and it doesn’t make sense for Him to threaten us with His own creation.

Second, even if global climate change IS happening, the Second Coming will take place beforehand, so we need not worry about it significantly affecting any of us. James Watt, secretary of the Interior under Ronald Reagan, once told Congress that “protecting natural resources was unimportant in light of the imminent return of Jesus Christ. In public testimony he said, ‘After the last tree is felled, Christ will come back’.” (and, really, if you’re not taken up in the Rapture, you deserve whatever the angry planet and God can throw at you, right?).

Third, perhaps global climate change is related to the sins of God’s people. Pastor John Hagee noted in a 2006 interview that super storms like Hurricane Katrina aren’t a product of climate change. Instead, it was “God’s retribution for a planned gay pride parade.”

As long as influential pastors like Hagee and his cronies preach that “[t]he most important thing to the Christian community is not the environment but evangelism,” as long as sitting politicians deny global warming for their own reasons, be they religious or out of economic greed, we’re unlikely to see the Republican Party take a stand against climate change. Political Science Quarterly published a report on the politics of End Times and its affect on climate change in June of 2013 that concluded that the “…belief in the “Second Coming” of Jesus reduced the probability of strongly supporting government action on climate change by 12 percent when controlling for a number of demographic and cultural factors. When the effects of party affiliation, political ideology, and media distrust were removed from the analysis, the belief in the “Second Coming” increased this effect by almost 20 percent. (This suggests there is a significant overlap between those three variables and belief in the “Second Coming.”)”

The question, then, becomes: how can we combat the religiously wrong influence that seeks to deny climate change, undermining our ability to work towards a healthier planet?