“What is Dominionism” – Used with permission from the author, Leah Burton.

Think of this word as a big umbrella. Under the umbrella of Political Dominionism are numerous “franchises” or sects of radical Christian belief whose goal it is to take “dominion” over all things secular. They may have differing theological beliefs, but at the core they have a common goal of  inserting biblical law into American government. They falsely spin their message that America is a Christian Nation and that only those who believe as they do should be at the helm, because after all, they know what is best for us. Putting it VERY simply…

“Defined in its simplest form, Christian Dominionism is a political approach to Christian faith based on a literal interpretation of Genesis Chapter 1 verses 26 – 28 of the Christian Bible. Believers perceive themselves as the “chosen” or the “elect”, commanded by God to “subdue” the earth and “have dominion” over all living creatures.

The goal of Christian Dominionism in the United States is to abolish Separation of Church and State, establishing it as a distinctively Christian Nation based upon Old Testament Mosaic Law.

Dominionism is an umbrella term that harbors many divergent franchise groups claiming a foundation in Christianity”.

Simple? Yes. But it explain who they are in terms we can understand. They represent a minority of those who call themselves Christian and taint mainstream Christians with their extremism.

It is a growing movement supported by political Christians who teach that America is a nation built on a singular religion, Christianity – and all citizens are to be subject to laws and rules that are in accordance with their Dominionist version of reality.

I speak of political Dominionism everyday and how this extreme version of Christianity has co-opted conservative politics in America. The most frequent question I am asked is, “What is it?”Followed by, “I’ve never heard of it before, why?” Many have written about Dominionism across the internet over the past couple of decades including scholars, journalists and researchers who do a stellar job of putting this all in perspective for those who are seeking answers to just what this Movement is. We must go beyond Wikipediato get an accurate picture. Even though the contributors have expanded the definition over recent months to incorporate the broad-base way in which I began using this term nearly 3 years ago – it is subject to resistance by those who argue the “correctness” in defining this Movement as Dominionism. But here is the bottom line. Dominion is an English word defined in the dictionary as,

1. Control or the exercise of control; sovereignty:
2. A territory or sphere of influence or control; a realm.

In his own words, here is the definition of their goals by one of the many Dominionist leaders, Evangelical Preacher George Grant…

That’s what Christ has commissioned us to accomplish. We must win the world with the power of the Gospel. And we must never settle for anything less…

Thus, Christian politics has as its primary intent the conquest of the land — of men, families, institutions, bureaucracies, courts, and governments for the Kingdom of Christ.”

From The Changing of the Guard: Biblical Principles for Political Action by George Grant, published in 1987 by Dominion Press

Thank you, George, for making my point crystal clear. By the way this guy served as an assistant to D. James Kennedy at the Coral Ridge Presbyterian Church in Florida. Oh, on that note. Our ReBiblican congress members who seemingly cannot find time to address rising unemployment in America in 2011 – did find time to pass House Resolution #71, honoring D. James Kennedy who organized a group named “The Center for Reclaiming America for Christ”. This notion of having to “reclaim” something that they truly believe they lost is pervasive. In order to understand that they must convince you that we always were a Christian Nation and now it must be reclaimed by them in order to savve our country from moral decline.

“So let us be blunt about it: We must use the doctrine of religious liberty to gain independence for Christian schools until we train up a generation of people who know that there is no religious neutrality, no neutral law, no neutral education, and no neutral civil government. Then they will be get busy in constructing a Bible-based social, political and religious order which finally denies the religious liberty of the enemies of God.”

Here is one of the very BEST expanded definitions of Dominionism I have seen anywhere, by renowned Dominionist expert researcher/author and blogger at www.discernementministries.com as well as www.herescope.com. With her permission I am posting the captures of her Newsletter. If you find this difficult to read in this format you can always click on any one of the panels below to view her pdf that will allow you to enlarge the article. 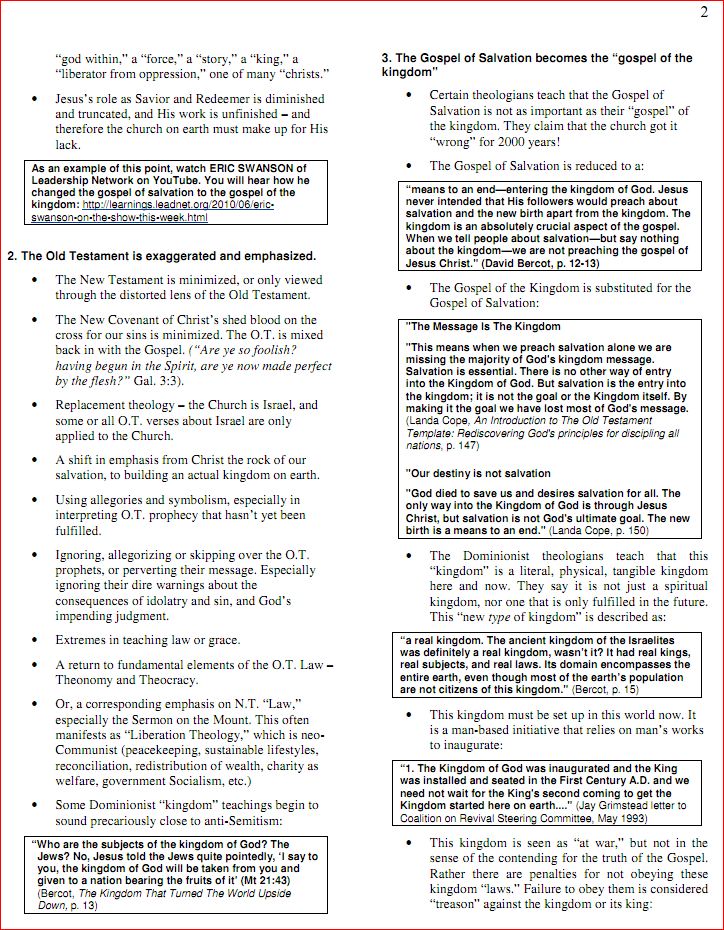 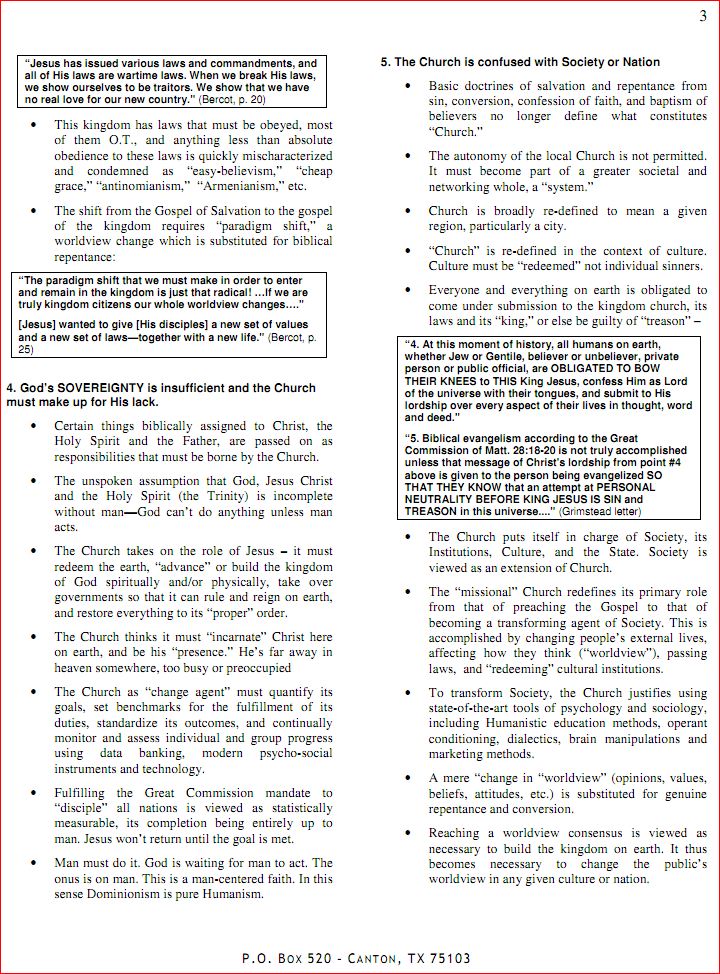 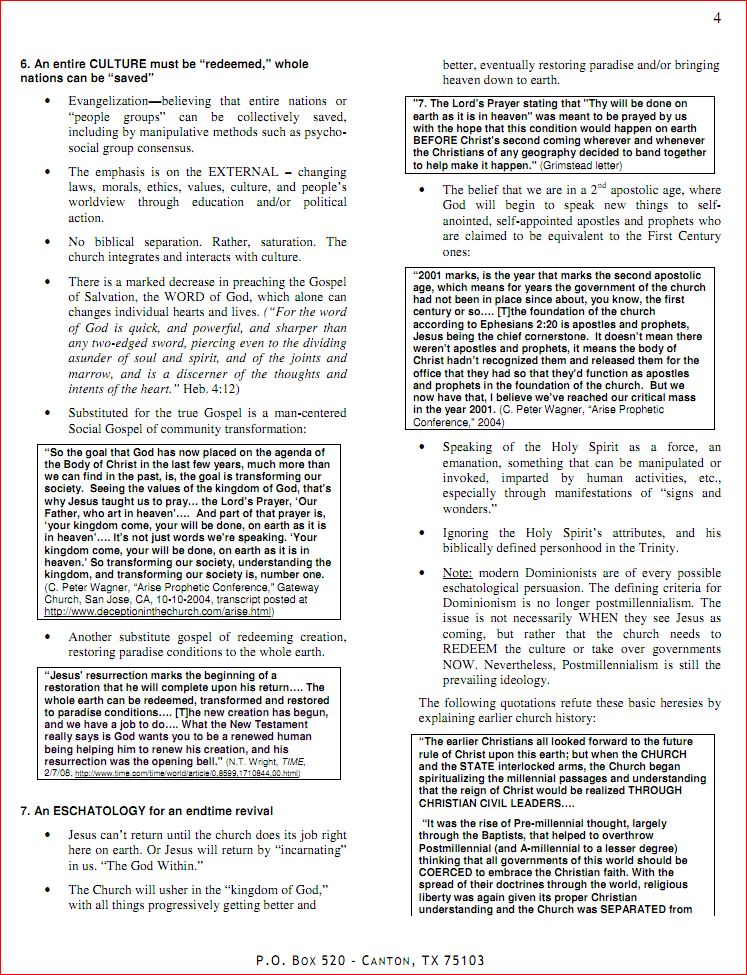 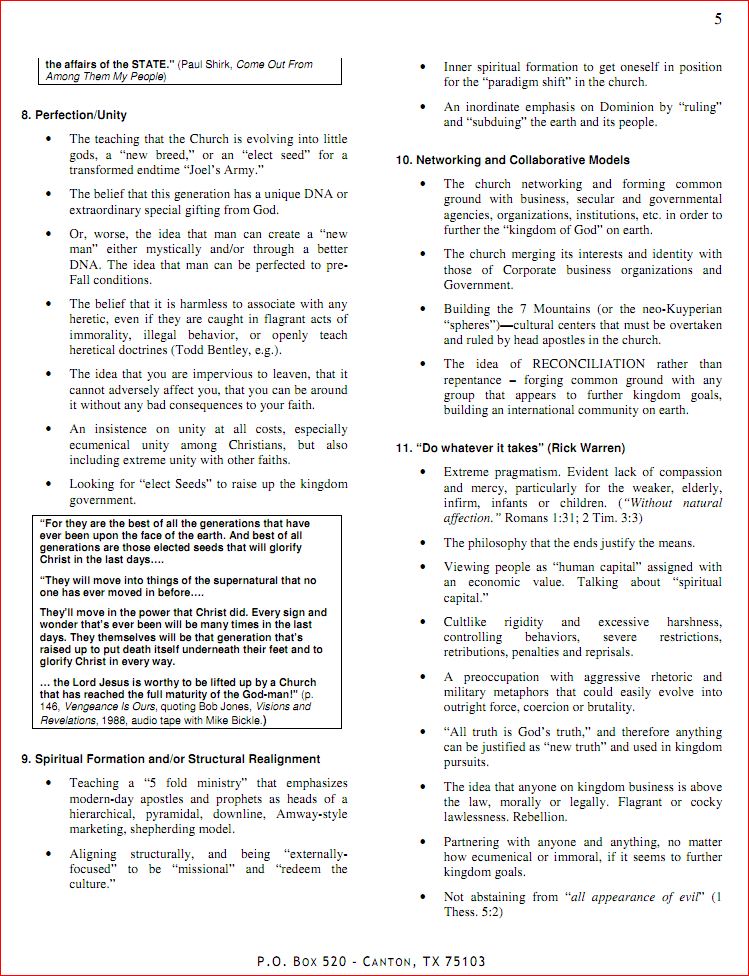 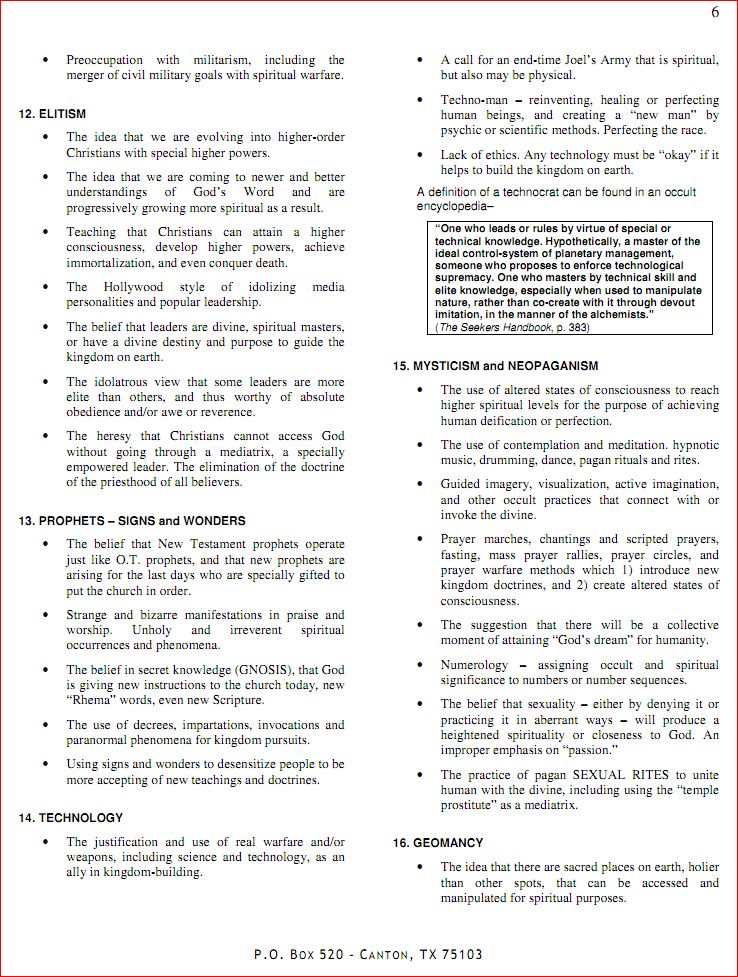 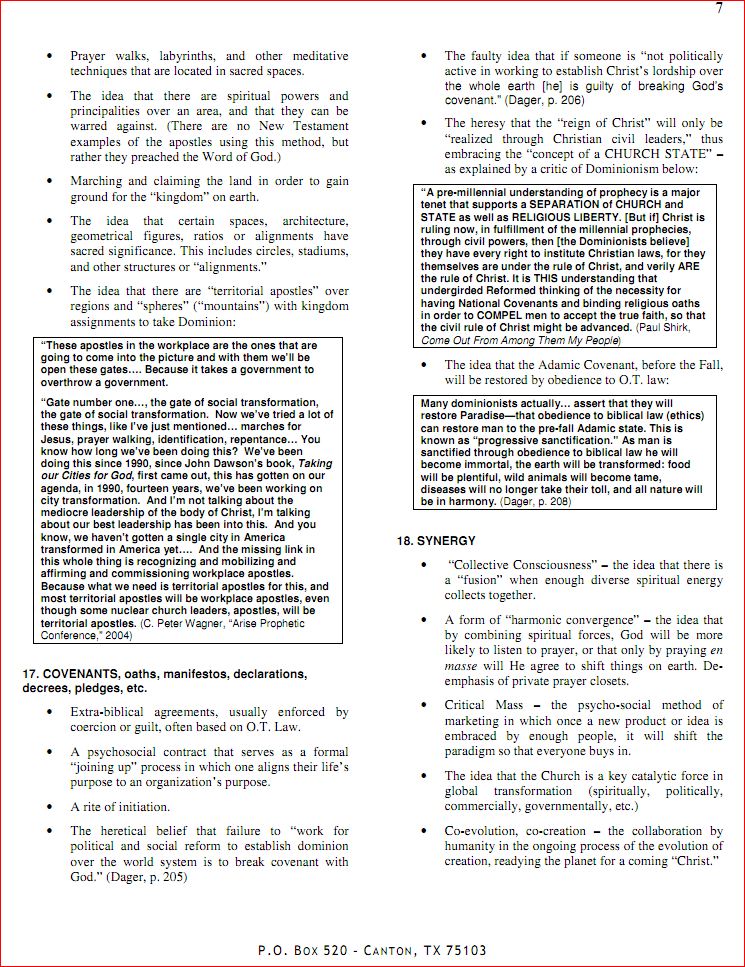 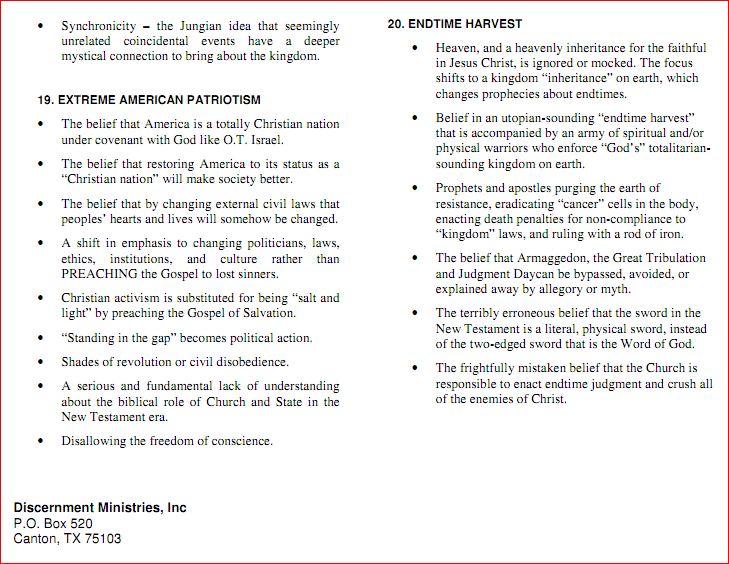 Many, many thanks to Sarah Leslie for letting me post this entire article here for all of you to read. As I say, she is a renowned authority on Dominionism and her work has contributed to  those like myself getting involved in this fight against a Scripture-twisted co-opting of the Christian faith to use as a vehicle to take control over our lives and erode our freedoms falsely using the name of Jesus Christ.

The following is an article posted at Newsvine.com in May 2009 by my fellow researcher, Alex Bird who writes as “dogemporer”:

You will find a complete listing of all of her footnotes to this article by going to Newsvine where this article was first published.

There are many, many knowledgeable researchers, writers, teachers, ex-Dominionist theologians and more who have written about the dangers of this extremism and it is impossible to list them all here – but I will provide links to some of the most notable articles that are well wroth taking the time to read.

I will add more over time…but this should sufficiently overwhelm any first time reader of Christian Dominionism in American politics. Stay with me! We need everyone to become aware of this extremism. It is our own homegrown version of what the Muslim world has dealt with for years when they are all lumped in with the Islamic extremists.

The following list is provided by Bruce Gourley.com and gives the tip of the iceberg look into how widespread this Movement is and how adept they are at spreading themselves across so many organizations that it appears that they are not cohesive: