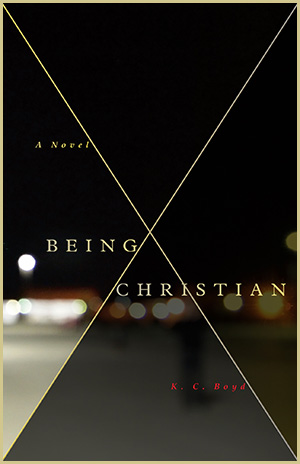 Has Christianity gone off the tracks?  Is it possible that one day soon it might be branded as an extremist religion? With politicians’ continual pandering to End Times believers, will 2013 bring about yet another war in the Middle East? How will ideological Christians impact U. S. actions in Syria and Iran?

For over a decade, K.C. Boyd has been paying close attention to the seismic shift in American politics that has opened the door to deep-pocketed Christian Zionist and Jewish ideologues. Greatly concerned, she set out to learn all that she could.  After sitting through countless non-denominational services, attending coast-to-coast conventions and viewing dozens of films, Boyd decided to share what she was seeing through the medium of fiction, and Being Christian, A Novel was born. Being Christian is the first novel since Elmer Gantry to deal with the dark side of American religion through story.

“My hope is to raise the level of conversation nationally and on a sustained basis about the dangers of religious extremism, be it from Christians, Jews or Muslims,” says Boyd.

Boyd is on a mission to expose the dark underbelly of extreme religion in the U. S. and to urge Americans to take this crisis seriously, particularly as it pertains to the impact that it has on U.S. foreign and domestic policy. In an informative and sometimes controversial interview, the following topics can be discussed:

K.C. Boyd wrote Being Christian, A Novel to expose the impact the “Religious Right” has made on American politics in the last decade. She devoured dozens of books on the topic, viewed countless televised sermons, and traveled to various “Values” or “Christian conferences” across the country, where she has seen and heard influential politicians and their religious counterparts promulgating hatred toward Muslims and liberals Being Christian shines a light on the back channels of today’s religious con artists in a dark, racy and occasionally humorous way with a message that should resonate with all faiths and parties: Christians, Jews, Muslims, Atheists, Democrats and Republicans.

Being Christian, A Novel is available at www.BeingChristtian.net,   Amazon.com, BarnesAndNoble.com, as well as other online booksellers.