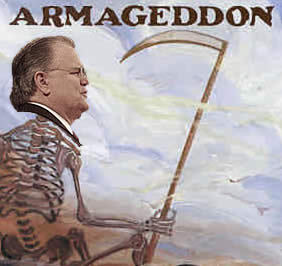 Christian Zionists like John Hagee see recent events in Syria, however they go, as a sure-to-be promising fulfillment of biblical prophecy; the ushering in of the glorious Final Battle where the Saved will be saved and the “unchurched” get theirs in Hell.

No matter how limited our response, the fact that we respond at all pretty much guarantees that the Hagee triumvirate of evil – Syria, Iran and Russia – will come together as he sees predicted in the Bible. And rather than seeming to push for a missile strike, Hagee dogwhistles his glee in this September 3 tweet:

“He never promised you would never be in battle; but He did promise the battle would be His and you would have the victory every single time!”

If President Obama doesn’t get Congressional approval and he backs down, what then?

In Hagee-world, should the US look away from Assad’s use of chemical weapons, it will telegraph to the same three players that there are not now, and never will be, repercussions for WMD use. In other words, as Hagee sees it, an ounce of poison sent Israel’s or America’s way guarantees a global response of unprecedented technological fury – a kind of man-made End Times.